UK prepares to include over-50s in autumn Covid booster campaign

UK prepares to include over-50s in autumn Covid booster campaign

The UK government is getting ready to roll out Covid-19 booster jabs to all adults aged over 50, in a broader autumn campaign than its vaccine advisers had previously suggested.

Under provisional guidance issued last month, only care home residents, the over-65s, frontline health and social workers and vulnerable younger people would be eligible for the next round of vaccines.

But Sajid Javid, health and social care secretary, told the Financial Times that he had asked his team “to be ready for it to be over-50s and above. That doesn’t mean to say it’s going to be over-50s . . . but I always want to be prepared — just in case JCVI [Joint Committee on Vaccination and Immunisation] broadens the cohort — and be flexible in our response”.

His comments come as new Omicron variants sweep across Europe, with increases in hospitalisations as well as infections.

Several immunologists and public health experts have advised ministers to roll out jabs for all adults over the autumn and winter, phased according to age and other risk factors like the original 2020-21 vaccination campaign.

Javid said that, while no final decisions had been taken about which booster vaccines would be offered to whom, it was “highly unlikely” the campaign would extend to all adults.

Critics of the plan insist the net needs to be spread wider. “The problem is that JCVI focuses on avoiding hospitalisation and death from severe Covid,” said Devi Sridhar, professor of public health at Edinburgh university, who advocates a staged rollout of boosters for all adults.

She said Covid vaccination should be extended to reduce the economic, educational and social costs of the disease — and its sequel long Covid — in younger people.

“I am less worried about the current wave of infection than about the one coming in the autumn, when people will have lost a lot of immune protection,” she added.

On Wednesday Steve Russell, NHS England’s national director for vaccination and screening, and Nikita Kanani, its medical director of primary care, sent a letter to NHS leaders outlining next steps for Covid vaccination.

They said the NHS should plan for an autumn campaign “on a minimum scenario for cohorts 1-6 and a maximum scenario of cohorts 1-9”. The former would include people 65 and over, the latter everyone 50 and over.

The letter also told NHS colleagues to “consider how they would rapidly deploy additional Covid-19 vaccination in the event of a surge”.

“These plans will need to limit the impact on primary care, routine and elective NHS activities, including other routine immunisation programmes,” they wrote.

The NHS continues to try to persuade people who are already eligible for fourth booster doses — mainly over-75s and those with suppressed immune systems — to get their jabs, with a quarter of a million reminder letters due to be sent.

According to Airfinity, the London-based health analytics company, the UK’s fourth dose programme has been a success by international standards, with an 84 per cent uptake — well ahead of other western countries. Uptake of Britain’s third booster, however, at around 60 per cent of the population, is similar to other European nations.

Alongside the discussion of who should be eligible for vaccination is a debate over what type of vaccine to deploy in the autumn.

The manufacturers that have led the development of Covid jabs, BioNTech/Pfizer and Moderna, are pushing health systems to adopt their new vaccines, which target Omicron variants.

Paul Burton, Moderna’s chief medical officer, warned that if health authorities do not switch to an Omicron-targeted booster, they will be relying on a vaccine that offers a less robust protection for a shorter duration.

“There would be more breakthrough infections and probably more severe disease and hospitalisations,” he said, adding that if the northern hemisphere follows the southern, health systems could also be strained by a bad flu season.

Moderna has been manufacturing a bivalent vaccine, which includes the genetic code for the original Wuhan strain and the BA.1 Omicron variant, “at risk”, stockpiling several hundred million doses in the past few months.

Burton said these would be sent first to the southern hemisphere but then there would be enough available in late August or early September in the UK and Europe. 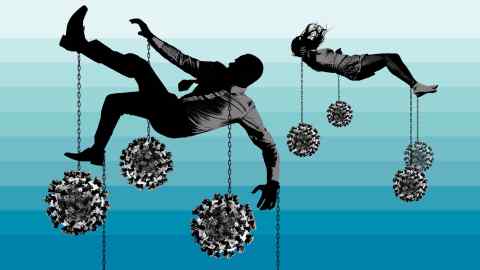 Javid said the results from the Moderna study, as well as those being carried out by Pfizer and other companies, would be taken into account in determining which vaccines were selected for the booster programme.

He added: “I couldn’t say today exactly which vaccine it will be and also what type — whether it’ll be bivalent — but it will be what we broadly would call the next generation Covid vaccines.”

Professor Adam Finn, a member of JCVI, said Moderna’s data was “very encouraging”. “I think we’ll see this vaccine approved fairly expeditiously, rolled out in late 2022, depending on how quickly they get their act together,” he said.

He added that a new vaccine would not change the UK’s approach, which should be to protect those most likely to be hospitalised. But, he warned, the calculation would change in the “nightmare scenario” of a new variant that caused more serious disease.