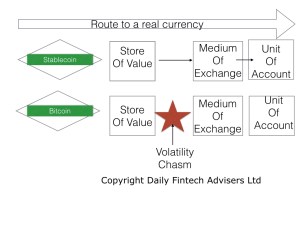 To CBDC or not, that is the question!

Here is our pick of the 3 most important Stablecoin news stories during the week.

This week we saw arguments for and against the implementation by Central Banks of a state backed stablecoin or CBDC.

Firstly, the BIS published a study on the rise and power of digital platforms which are defined as marketplaces that enable connectivity of buyers and sellers along with the facilitation of exchange such as AirBnB and Uber.  These will be early adopters and most likely issuers of stablecoins and/or CBDC’s.

“Three types of digital platforms are expanding in financial services: (i) fintech entrants; (ii) big tech firms; and (iii) increasingly, incumbent financial institutions with platform- based business models. These platforms can dramatically lower costs and thereby aid financial inclusion – but these same features can give rise to digital monopolies and oligopolies.”

Significantly, the paper called for ex ante (early or ahead of time) regulation of platforms and the need for Central Banks to be focused on their role as protector of consumers interests.

Also the BIS released this week a report on the status of CBDC development globally in which China leads the way.

Then, later in the week in the UK, the Lords Economic Affairs Committee said introducing a central banking digital currency (CBDC) “would have far-reaching consequences for households, businesses and the monetary system”.

“The introduction of a UK CBDC would have far-reaching consequences for households, businesses, and the monetary system for decades to come and may pose significant risks depending on how it is designed,” the committee said in a report.

“These risks include state surveillance of people’s spending choices, financial instability as people convert bank deposits to CBDC during periods of economic stress, an increase in central bank power without sufficient scrutiny, and the creation of a centralised point of failure that would be a target for hostile nation-state or criminal actors.”

‘Britcoin’: There isn’t a ‘convincing case’ for a digital currency in the UK, House of Lords committee says | Business News | Sky News

In a similar manner in the US, citing the privacy dangers posed by China’s digital yuan, Rep. Tom Emmer proposed a bill to bar the Fed from creating a digital currency for consumers.

In a press release describing the bill, Emmer warns that a digital currency issued by the Fed could be a slippery slope in which consumers could one day be forced to register with the central bank to access money, which could in turn lead to mass surveillance of their financial activity.

So in summary, do we trust our Gamekeepers (Central Banks) to turn poachers and issue their own CBDC?  Or are we better off having them focus on their role as regulators and protectors for consumers and let BigTech and FinTech succeed and sometimes fail to deliver us this new innovation?

Alan Scott is an expert in the FX market and has been working in the domain of stablecoins for many years.

We have a self imposed constraint of 3 news stories per week because we serve busy senior Fintech leaders who just want succinct and important information.

For context on stablecoins please read this introductory interview with Alan “How stablecoins will change our world” and read articles tagged stablecoin in our archives.

New readers can read 3 free articles.  To  become a member with full access to all that Daily Fintech offers,  the cost is just US$143 a year (= $0.39 per day or $2.75 per week). For less than one cup of coffee you get a week full of caffeine for the mind.